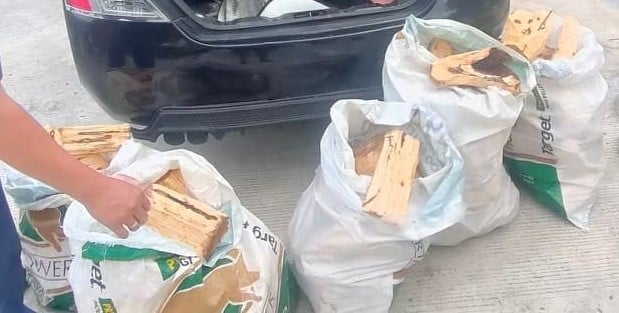 The Department of Environment and Natural Resources (DENR) said that while propagation of agarwood-producing species like Aquilaria malaccensis is allowed, it is however highly regulated and collecting its seeds directly in the wild is prohibited.

DENR Secretary Roy A. Cimatu issued the statement following the granting of Wildlife Culture Permit through the regional offices to certain companies for the propagation of agarwood using Aquilaria malaccensis.

“The DENR is always in the middle of balancing things, from protecting and conserving threatened flora and fauna, making sure that the resources can still be used for our economic development, especially during this crisis, but utilization in a sustainable manner,” Cimatu said.

He added: “Before engaging in this highly regulated lucrative endeavor, interested individuals and private firms are advised to secure all the necessary permits from the DENR. We must ensure that the source of planting materials is legal and that the propagation of this species is in accordance with the existing rules and regulations.”

Agarwood can be derived from the Aquilaria species, which are widely distributed in the Indomalesia region.

Nine of the 21 known Aquilaria species are found in the Philippines, based on an international study titled, “The Origin and Domestication of Aquilaria, an Important Agarwood-Producing Genus.”

Six species are endemic or found only in the Philippines, while the remaining three are native or indigenous.

Among the native or indigenous species is the Aquilaria malaccensis, which can also be found in other countries, such as Bangladesh, Bhutan, India, Indonesia, Iran, Malaysia, Myanmar, Singapore and Thailand.

The Aquilaria malaccensis, locally known as “lapnisan,” is a major source of agarwood — a resinous heartwood used for perfume and incense.

Meanwhile, DENR-BMB Director Datu Tungko Saikol said that gathering of seeds and seedlings, agarwood, and other derivatives of Aquilaria malaccensis in the wild for commercial or trade purposes is “not allowed yet pending the population assessment study of the species in the Philippines.”

“Those who are interested to propagate this species of agarwood may apply for a Wildlife Culture Permit from the concerned DENR Regional Office where the farm or plantation site is located. The seedlings should be sourced legally as well,” Saikol said.

“While we allow the importation of the Aquilaria malaccensis seeds through the issuance of CITES or the Convention on International Trade in Endangered Species Import Permit by BMB, applying for a CITES Import Permit for seeds of exotic Aquilaria species such as Aquilaria crassna for use in the establishment of plantation in the country is a more tedious process as it requires prior clearance from the DENR Secretary upon recommendation from the Wildlife Management Committee,” the DENR-BMB chief said.

Moreover, a Local Transport Permit is necessary “for the transportation of legally acquired seeds, seedlings, agarwood, and other agarwood by-products and derivatives.”

Saikol expressed hope that the issuance of Wildlife Culture Permit will “contribute in the protection and conservation of Aquilaria malaccensis in the wild and will at the same time provide economic benefits for Filipinos, and eventually, economic development for our country.”

The Agroforestry Plantation Program (APP) is a credit assistance program for the development, expansion, harvesting, processing, maintenance and protection of industrial forest-based plantations in qualified private and public land consisting of at least five (5) to forty thousand (40,000) hectares of open area.

A DRAFT administrative order that may pave the way for the commercial propagation of the agarwood-producing Aquilaria tree species in the Philippines amid the pandemic is now being reviewed by a technical working group of the Department of Environment and Natural Resources (DENR) Central Office.

Once it passes the crucial assessment, the draft administrative order will be submitted to the Office of the Secretary of the DENR for signing, finally putting in place guidelines for the establishment of commercial or backyard tree farms for the purpose of producing agarwood.

Listed under Apendix II of the Convention on International Trade in Endangered Species, trading of Aquilaria species is regulated and requires a specific permit to import and export.

COMMONLY called Lapnisan, Aquilaria tree species naturally occur in Southeast Asian and Asian countries and only one or two species are common to one or more countries.

In the Philippines, Aquilaria is an endangered species, which means it is in danger of being extinct, all because of the frenzied hunt for agarwood and its exotic fragrance.

The DENR’s Biodiversity Management Bureau is eyeing the establishment of agarwood farms starting with the commercial propagation of Aquilaria as a conservation measure, with hopes of preventing the illegal trade that targets Aquilaria tree species in the deep forests of the Visayas and Mindanao.

Nevertheless, she said, interested parties may now apply for a wildlife collector’s permit (WCP) for the purpose of gathering Aquilaria trees, which they can propagate, perhaps as an income-generating venture amid pandemic economic difficulties. The prospect of the draft guidelines eventually getting the approval may happen soon.

Seeds and seedlings of Aquilaria are also now available on the market, as some countries have started commercial propagation of the unique tree species, it was learned.

“I think so. It will be approved, eventually. As a policy-making body, we recommended it. It is now in the planning and technical working group for further study,” says Tenazas.

BECAUSE it is expensive, agarwood is a target of illegal wildlife traders. The market for this rare wood product is not local but outside the country. “Buyers are from other Asian countries, not here,” Rogelio Demelletes, a wildlife law enforcer from the DENR-BMB, told the Business Mirror.

Those who brave the dense forests of the Visayas and Mindanao in search for agarwood, he said, are highly motivated by the cost of this rare commodity.

ONCE put in place, Tenazas said, the guidelines would allow the process for wildlife collectors’ permit application to start rolling.

“Once approved, those with a wildlife collector’s permit will need to have a wildlife culture permit for trees. That’s the counterpart of a wildlife farm permit,” Tenazas said.

Upon approval by the DENR-BMB, applicants for wildlife culture permits can start the commercial propagation of Aquilaria trees.

“Right now, we are open for wildlife collector’s permit. They can apply anytime. The problem is we still haven’t identified the areas where these trees can be found,” she said.

She said the DENR-BMB and the Forest Management Bureau (FMB) might need to conduct a survey to identify the areas where the collection can be allowed.

The conduct of mapping and surveying to identify the areas is also integrated into the draft guideline submitted by the DENR-BMB.

Authorities have made several arrests against those who have been caught illegally transporting small quantities of agarwood. While the agarwood the perpetrators collected is in small quantities, it is highly possible that they have already cut several trees to collect even just a kilo.

“It’s hits and misses. Not all Aquilaria they can find are agarwood. But they cut it down, nevertheless,” Demelletes said.

AGARWOOD, also called the “wood of the gods,” is one of the most expensive woods in the world.

Sought for its fragrance, agarwood comes from several species of Aquilaria trees.

Asian Forest Cooperation Organization (AFoCo) Executive Director Ricardo L. Calderon said agarwood is formed in the heartwood of Aquilaria trees when infected with a type of mold. As the infection progresses, a dark aromatic resin called agar is produced.

With its distinct fragrance, agarwood is used in incense and perfume, and sometimes for its medicinal value.

“Due to the depletion of the tree species from the wild caused by over-harvesting and habitat loss, it was listed under Appendix II of CITES in 2004,” Calderon said.

He believes that through commercial propagation, overharvesting can be avoided as a legal source of the precious commodity becomes available in the Philippines.

BECAUSE of its commercial value, plantations have already been developed in Malaysia, Sri Lanka and Cambodia, said Calderon, who initiated the crafting of the proposed guideline for the commercial propagation of Aquilaria trees and agarwood during his stint as director of the DENR-BMB.

Calderon said there’s economic opportunity in agarwood farming. Even backyard farming, he said, is quite promising.

Other countries have developed a way to produce agarwood, which is also possible in the Philippines, Calderon said.

The science behind it is already known and there are ways to make it happen in tree farms.

While agarwood takes a decade or more to develop in the forest, in tree farms, agarwood can be mature in three to five years, according to Calderon.

“Agarwood is produced naturally in the forest when the tree is injured. In the plantations in Cambodia and Indonesia and in Papua New Guinea, they intentionally injure the trees for the mold to develop and produce agarwood,” says Calderon.

According to Calderon, the DENR through its forestry experts can help provide the much-needed training and capacity building for would-be agarwood farmers.

“We have Filipino foresters who have been employed in some of the tree farms doing these,” he added.

Aquilaria, he said, are usually found in secondary forests, between 300 and 400 meters above sea level. “These are rolling areas,” says Calderon.

But in tree farms, he said, it can be grown in low-elevation areas.

“In our proposed regulation, it can even be done in backyards. As long as they register the tree, they can get a permit to harvest it once it develops agar,” he said.

Original news posted found on the link below.